A space game with a simple yet exciting premise: millions of daring space pilots scavenge the galaxy for valuable resources, armed and ready to take on any challenge that comes their way!

One of the most successful browser games in history

DarkOrbit is a very popular browser MMORPG that has attracted over 47 million registered users since its launch. This makes it one of the most successful browser games of all time and also one of the largest and most spectacular sci-fi game worlds ever created. Every day, hundreds of thousands of players fly their customized spaceships across the DarkOrbit galaxy, seeking rare resources, hunting aliens and engaging in action-packed battles. To give you an idea of what is involved: according to the publisher, Bigpoint, over 650,000 Streuner NPCs are shot down per day on Instance 22 – one of the game’s oldest and busiest servers.

There are a lot of resources out there in the galaxy and you will be tasked to mine them at the DarkOrbit web-based game by Bigpoint. The game is based on three mining corporations that are trying to take control of the resources that outer space contains. You may choose to play as any of the three corporations and you can start your campaign within safe areas. After the grace period, you can engage in free-for-all battles.

The three mining corporations in the game are the Mars Mining Operation, the Earth Industries Corporation and the Venus Resources Unlimited. Mars Mining is strong in battle and gaining new mine fields but they struggle to take care with their manpower. Meanwhile, Earth Industries upholds the principle of working as a group but their attack prowess is not as strong as that of Mars Mining. On the other hand, Venus Resources’ specialty is taking care of their territories and their employees.

The three companies battle for control over lucrative mineral fields and mine ores that are scattered in the galaxy. Aside from this, a player can complete several quests to garner game currency and experience points that will upgrade their capabilities. Aside from the typical game money, players can also search for Uridium which has more worth but is harder to obtain. These can be used to buy upgrades and additional weaponry at the game’s store.

Switching sides is possible but heavy penalties shall be bestowed. Likewise, corresponding penalties are also awarded if you meet your demise. To coordinate missions with your allies, you can leave messages at the chat box located at the left side of the game screen. The missions and quests can be conducted in any of the game’s 28 maps that provide various strategic challenges and bonus boxes. Dark Orbit also has a monthly free-for-all tournament wherein the last player standing will win $10,000.

For faster loading time only the small version of the screenshot can be previewed here. Please click on the image to view the larger size. 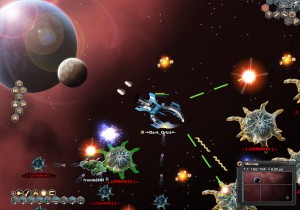 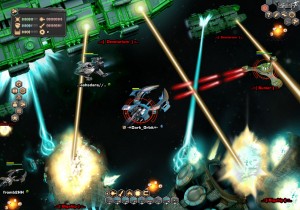