One of the most popular free-to-play 3D fantasy MMORPGs today, Forsaken World has very artistic graphics that has been compared to a “high-definition World of Warcraft” with impressive-looking character models and customization. It has everything you could possibly want in an MMO – story-driven quests, lots of different professions, talents, instances, guilds, mounts, pets, achievements and auction houses. The latest expansion, Nightfall, introduced a new PvP arena and tons of new content for both high and mid-level players.

What sets this game apart from the others and makes it worth playing is that the cash shop is run in a very generous way. All cash shop items are sellable and tradeable with other players. F2p players who don’t want to spend real-life money on items are thus able to buy them from other players and there is also an in-game method of trading in-game gold for premium currency. In other words, the cash shop is much less annoying in Forsaken World compared to other MMOs. 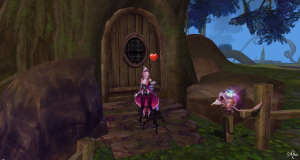 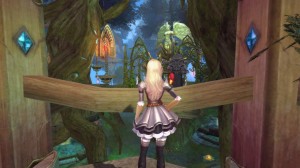 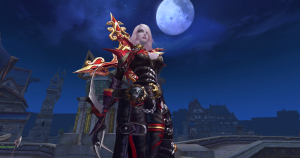 Gameplay Overview and Introduction
~ by MartinF

Forsaken World is a 3D rendered MMORPG developed and released by Perfect World on October 2010. This MMORPG mixes elements from both Eastern and Western culture in order to widen its gaming appeal to every nation’s gamers. The gameplay began with the creation of Eyrda by Dyos. Dyos, together with his three children, created the different races which populated the Eyrda. These races include the elves, dwarves, humans, kindred and stonemen. Mylvada, the fourth child of Dyos, became the primary villain of this MMORPG after strife occurred because his three siblings shunned him to the sideways.

This game begins as Mylvada tries to resurrect Dysil, an evil dragon which can destroy Eyrda. At the commencement of the game, the player should choose which race they want to be during the fight against Dysil. The character chosen should then venture in different parts of Eyrda in order to collect the different relics that have vanished during the previous god wars. Also during the journey, the character should look out for the Godly Essences that can make him more powerful as he prepare towards the battle against Dysil.
Like other MMORPG, characters should be leveled up by defeating monsters throughout the game. Gaining level unlocks more powerful weapons and skills that can be used in fighting stronger opponents. Aside from battling monsters, players can also accomplish different in-game tasks to unlock gems and talent compasses. An achievement point system is present during the game which can also unlock different rewards as the player reach specific levels.

When it comes to the races in Forsaken World, dwarves are considered as the oldest and most technologically-adept. They are experts in building and operating machineries during battle. Elves are creatures that have close affinity with nature. Their beauty and close relationship with gods makes them good choice for battles as bards, priests or warriors. Players who pick humans as their character can become warrior, priest, assassin or mage. Kindreds, creatures which are born out of love of a demigoddess and a human, can be further leveled up to become vampires, mages or assassins. Lastly, stonemen take great pride with their sturdy defensive bodies. They can be protectors as the game progresses.