Hack and slash with this awesome free to play mmorpg.

The first thing note worthy about Vindictus and why so many people were hyped for it before release was because of the visuals. This game looks absolutely breathtaking. The opening cinematic and the overall high production values of the visuals will make you think that you are playing a full price retail game not a free to play one.

What makes this a great game in my opinion is the battle system. It is incredibly simple it really is more like a hack and slash game than your standard MMORPG style of battle. This may sound a little off putting I guess to some MMORPG purists, but I feel the more basic battle system makes it much more new MMORPG player friendly. 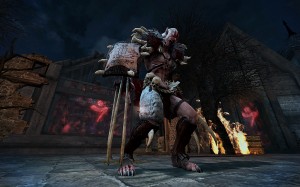 At the same time though there still are those RPG elements that we all love that surround the hack and slash action. You know the drill leveling up and finding new weapons and so on are all here, but thanks to the really cool battle system it kind of just makes the game that easier to pick up and play.

As far as free to play MMORPGs go this is a great entry for people. At the same time I feel that MMORPG veterans will find the battle system really fun and get a kick out of the game. And of course then there are those graphics. I know you do not play a game just because it looks good, but this game really is incredible. And did I mention it is FREE !!!